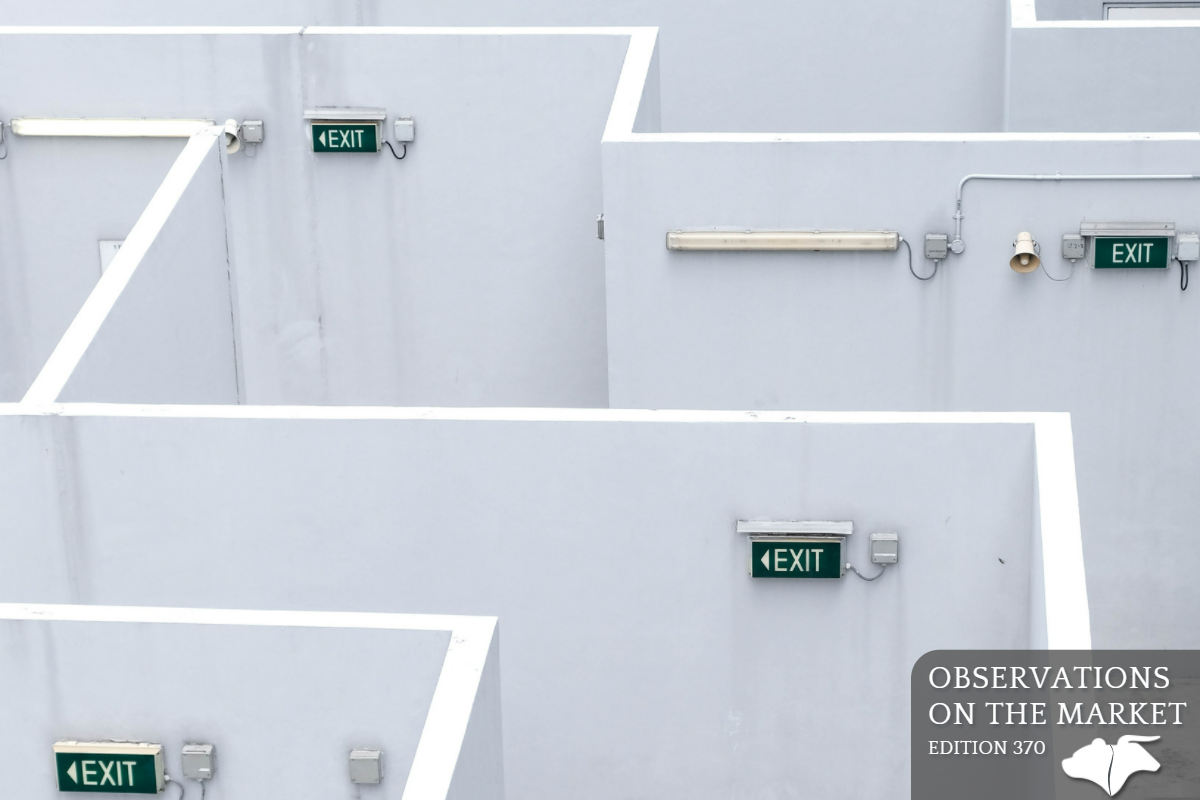 The Fed, Inflation, and Interest Rates – The Financial Markets Are in Transition

As I’m sure you’re aware, the global financial markets are in transition. We have a war, inflation, high oil prices, and now a Federal Reserve that is beginning to unwind its decade of free money policy. Are much higher interest rates coming, or maybe a recession? To even begin to answer that question you need to know where we are currently. Not just where prices are today, (that is easy enough), but why prices are where they are. Maybe a better way to say it is: What expectations are priced into the market currently? Here are a few “Observations” of what appears to be built into both the stock and bond markets today. You must understand that this can all change before you finish reading this letter, but we need to start somewhere.

Interest rates have had a dramatic shift in a very short period. In just two months mortgage rates have increased from 3.5% to 5.3%. It wasn’t that long ago that you could get a 30-year mortgage for about 2.5%. Thus, if you are shopping for a house, the economics clearly have changed. On the other side of the coin, if you are a saver, you can finally earn money again. On July 11th, 2021, you needed $200,000,000 (eight zeros) to earn just $10,000 if you were buying one-year Treasuries. Now, it ‘only’ takes $518,000 to buy that same $10,000 of income with the same one-year maturity. In one year, the interest rate environment has changed, which does impact your portfolio. The big question going forward is, what will happen next?

The Fed has stated that there are going to be multiple interest rate hikes coming in the next year. Exactly how many and how much is the big unknown. Their new agenda is to fight inflation with whatever it takes. With the latest inflation rate being at 8.5%, this leaves a potentially scary scenario. However, forward interest rates (which are the market’s barometer of future interest rates) suggest that Treasury rates may already reflect the Fed’s moves. If you are considering putting money in a two-year Treasury, you have a dilemma. Should I just buy a two-year note at 2.55%? Or buy a one-year treasury at 1.93%, and hope that in one year I will be able to reinvest for another year at a high enough rate to equal the current two-year rates?  If the future rate is anything less than 3.17%, you are better off just buying the two-year note now. To try and keep this simple, the market expects one-year interest rates to be no higher than about 3.17% in the next few years. This implies that the markets expect the Federal Reserve to not raise short rates much above 3% over the next two years or beyond. To put this in perspective, one month ago the future one-year interest rate was 3%, (about .2% less than today). So, market expectations do fluctuate daily. If current expectations hold, mortgage rates should not move much higher, and should eventually come down from their recent move above 5%, assuming they move more in line with Treasuries.

The stock market has sold off but didn’t panic until last Friday. Market analysts are looking for earnings to grow by 8.5% this year for the S&P 500. Surprisingly, with all the uncertainty in play, earning estimates for the S&P 500 have increased by 2% since the beginning of the year. With all that is going on, it is easy to wonder how is that possible? The simple answer is that higher inflation leads to higher corporate revenue, thus offsetting the negative effect of the war and higher oil prices. If earnings do end the year at $226 (the latest estimates), and the forward rate market is correct with its current assumptions, there shouldn’t be a major selloff. However, don’t bet the farm just yet on what you are certain is going to happen.

At the beginning of February, before Russia invaded Ukraine, it took 76 rubles to buy a dollar. If you were given the next two months’ news headlines in advance, you would likely make a sizable wager that the ruble was about to collapse. You would have been right for at least a few weeks; it did immediately decline to 143 rubles to the dollar, but it is now back to 76, even after the economy has slowed and the country has sabotaged itself politically. It’s logical to think that the Russian government is manipulating the ruble. Yes, but that is exactly the point. You don’t know what a government, central bank, or investors are willing or not willing to do. The future is not knowable.

Even with the latest interest rate moves, it appears that earning 2.8% for a ten-year Treasury does not compensate an investor for the risk of inflation. On the contrary, there is a fund that owns the companies that are specifically long-term dividend growers, and its dividend yield for this year is expected to be 2.3%. It has grown its dividend by 130% over the last eight years. If the dividend just grows by 5% per year for the next ten years, that would imply a dividend yield of 3.8% in 10 years at current prices. If inflation stays elevated, the dividend will likely be higher. It would seem to be better to invest in something where you are uncertain as to how high your cash payments grow, as opposed to the certainty of no growth and being locked in at a fixed 2.8% for ten years.